Tomorrow is my last technical day of school. Which just seems odd considering the fact I've already had two exams. But anyway - tomorrow is the day that is assigned each year, to say goodbye to the leavers.
So au revoir my dear school. For you have treated me well - for the most part anyway!
Posted by It's all in the name at 20:03 No comments:

Why I'm glad we are still here today.

The thing about... N names.

I have a passion for short N names for girls, that end in a.

Nola or Neva being my favourite.
Posted by It's all in the name at 21:52 No comments: 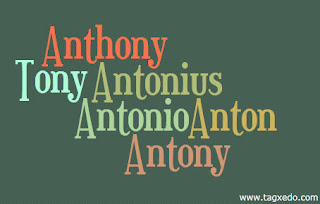 I have never met an Anthony who was after the 1970s, maybe that has something to do with living in Britain? Or maybe just where I live. Anthony, does not in fact even rank in the top 100 in England, so why it so popular over the pond?


Derived from the Roman name Antonius, Anthony or even Antony has a long history - and has been used in many languages since then.

It's meaning is just as pleasant - priceless. Though hardly a macho meaning by any stretch.


There are a fair few well known Anthony's (though many go by shortenings):


How Anthony fit's into a 2010/11 naming society I just am not sure, to me it still has a typical 1970s feel. It is too long to compete with likes of Chase or Logan, and the nicknames, Ant or Tony again do nothing for me, but evidently they have some appeal in the US. Maybe someone could tell me why? Or maybe it is a default name? Like John or David.

The thing about... Murphy

Some names:
The A's. Maybe the exam results will come through ok.
Posted by It's all in the name at 20:13 No comments:

It's all in the name